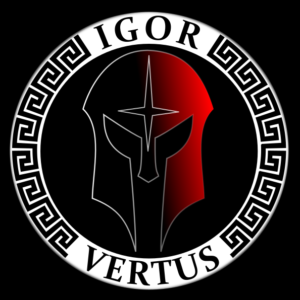 Igor Vertus (Igor Bicanic) is a long time industrial veteran. At the age of 12 he started sampling loops from the radio and mixed it with LP records to create his own tracks. Three years later he discovered FastTracker2 where he started making hardcore and gabber banging around 200 – 240 BPM.

With all the inspiration in the epic hardcore 1992-2002 era and 60+ tracks later he knew he had to upgrade for a more professional sound. He bought a drumcomputer (Korg Electribe), a sampler (Akai S2000), a synthesizer (Yamaha AN1x), a 12 channel mixer with all kinds of effects and JBL monitoring. For even better sound he got his hands on a professional sound card and a studio amp. He learned all the midi tricks he needed in Cubase. Still there were many limitations for the sound he wanted. The complexity needed way more gear and hardware-only wasn’t the answer.

As computers and software were getting more powerful, VST’s were getting more mature and the idea to go fully digital was on the menu again. I really liked the studio feel of turning knobs and playing live till you get the right sound and Cubase was not enough. Around that time Reason happened, which became the go to DAW. It wasn’t really complete then, but there were workarounds for that (like sampling and mastering).

He got his first recognition after winning a producer contest on a well known social website for party minded people, where he won a record deal for a known dutch label Mokum Records.

Around 2006 he got drawn in the trending hard techno scene, where he released two more techno / industrial tracks. After this he worked more and more in the background.

Now, ready again for what the scene has to offer, Igor Vertus will be dropping bombs on his own fresh label, Blackly Beyond. Techno, hardtechno, industrial, dark psychedelic acid. Get ready!